I started working in professional ministry with young people back in 1994. Since that time, I have seen media – TV, movies, music, online media, etc. – become increasingly influential in teens’ and young adults’ lives. Some of that influence has been positive; other portions, decidedly not.

Many have said that one of the greatest negative impacts pop media has had on young people is simple immorality: young people learn bad habits from consuming immoral media products. I don’t disagree. But I would also add that un-reality, rather than simple immorality, is an equal if not greater negative phenomenon found in young mediavores today.

“Un-Real: Young Adventists and the Current Reality Crisis” addresses this trend. Though originally the cover article for the October 28, 2013, edition of the Adventist Review, its conclusions remain even more relevant today.

The Three Angels Messages for Skeptics

Happiness and the Investigative Judgment

Give Your School a Fighting Chance! 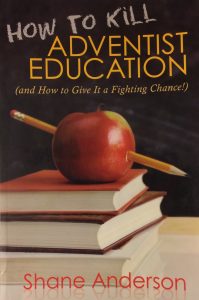 "Anderson hits the nail square on the head with the issues facing Adventist Education. An excellent read. No need to wait for your school to begin to fall apart, the insights by Anderson can and should be applied by all schools no matter their situation."﻿ - MN, Michigan